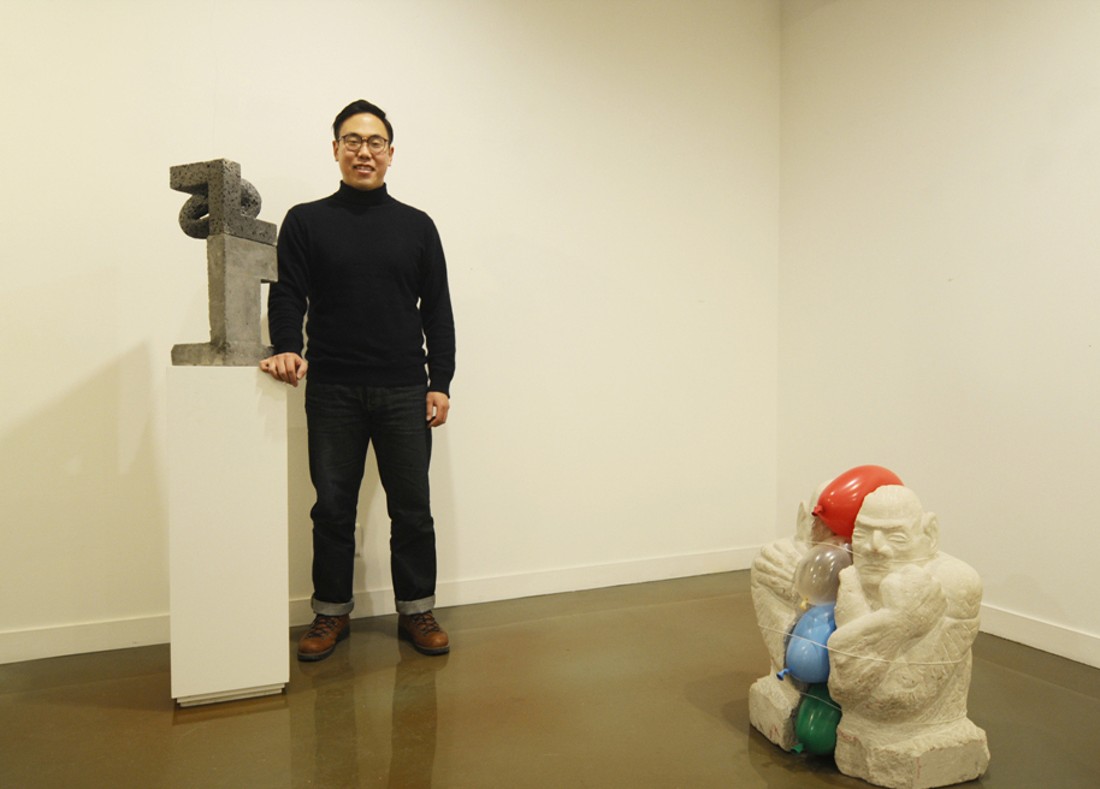 LEESANG ART Co. in Seorae Village, Seoul, hosts "strange exhibitions" from November 2018 to October this year. These exhibitions are held every month under the theme of the month's birthstone. LEESANG ART Co. wants to offer audiences gem-like works and gem-like time through an exhibition of artists who polish themselves to become gems and produce special light. In January,  <Garnet : True> (Moon-kyung, Beiduri, Yang Ho-jeong) was held with Garnet, the birth stone.

In this exhibition, "Amethyst: peace," artists Kim Jung-hyun and Jeong Su-an, both of whom are active in various genres, including painting and sculpture, will present works interpreting "peace."

Amethyst is one of the world's top six gems and also one of Korea's representative gems. Looking at the mysterious combination of pure blue and red colors of the Amethyst, one can feel why Amethyst means peace.

Peace is not just meant to be a peaceful and harmonious state without anxiety or pain, but is widely used to refer to a diverse range of life phenomena. There are two most prominent views on peace. One is from a passive perspective, the other is from an active perspective. Peace from a passive point of view is a state without war. It is the view of active peace which argues that the idea that a war-less state is peace is not genuine peace. Active peace refers to a state in which human basic needs are met and justice exists, not merely designated by a state without war.

From long ago to today, the meaning of peace exists in various forms: love, inner peace, harmony with nature/space, forgiveness and reconciliation, nothing or anywhere, peace as described in the Bible. People's endless desire for peace turns into a more personal view in modern times, and this view has also influenced today

Sculptor Kim Jung-hyun looked at "peace" from a pessimistic perspective. He says peace is a state in which different forces are balanced with tension. From the outside, the force does not seem to be working peacefully, but when countless elements of force are working on an object at the same time, the effect of the force disappears and rather creates a static situation.

The author tried to recreate the pessimistic aspects that exist in the large border of peace by placing a combination of hard stone with less variability and objects that change every minute in space as a phenomenon. He says sculpture is the history of force exerted on an object, and unlike other tasks, it is subtraction, not addition. Fragmentation is inevitably a work of destruction and removal. The condensation of countless forces on hard objects seems rather peaceful. The author inevitably destroys and removes solid matter by applying force to the endlessly tightly condensed material, re-lighting the elements of the other side.

Perhaps because of the harsh and hard-to-living reality, people demand comfort and communion through culture and arts. Jeong Su-an, a graduate of the Department of Painting at Sejong University, is a female artist who is just emerging in the art market as a warm-hearted painter who stimulates emotions to meet such modern needs. Perhaps that's why the artist, who has dreamed of becoming a painter only because of a love for coloring and comic books since childhood, creates paintings that are happy and full of inner peace and tranquility.

The artist says peace means calm and free from conflict. Rather than looking at peace as a social issue such as war or poverty, Jeong Su-an first expressed what peace is personally. The artist chose the "Rhizome" format as a way to express peace.

"Rhizome" means a plant whose branches touch the soil and turn into roots. Rhizome grows horizontally and stretches out its vines, which also grow into new plants and represent the meaning of "free from the limited structure." A weak stem develops in many directions, becomes a branch, and becomes a root, and becomes a tree and bears fruit and flowers. At this time, trees provide a cool shade, flowers bring a beautiful scent, and fruits enrich us. In the work, the artist works to maximize a peaceful image by combining images in the form of rhizome with people in one place. This gives the audience peace of mind with the unique serenity that comes from the artist's work.

Works of art - sculpture, painting, and peace as it is - which interpret the single theme of "peace" from various angles, including materials and techniques, all of which were made with time and effort behind the scenes, fill the exhibition space at LEESANG ART Co. The interpretation of the same but completely different theme is expected to be a creative exhibition where the public can feel the endless possibilities of artistic expression.

Lee Sang-mi, director of LEESANG ART Co., said, "It will be a meaningful exhibition where visitors will discern the flow of contemporary art on their own through the creative world of the two artists who have various themes," adding, "We will support the infinite possibilities of full-time artists' creations and lay the foundation for the sustainability of various creative activities in the future."

LEESANG ART Co. operates from 10 a.m. to 6 p.m., Monday to Friday. The exhibition is free admission. Saturdays are closed and available only by reservation. For reservation inquiries, please call 070-4949-2998.